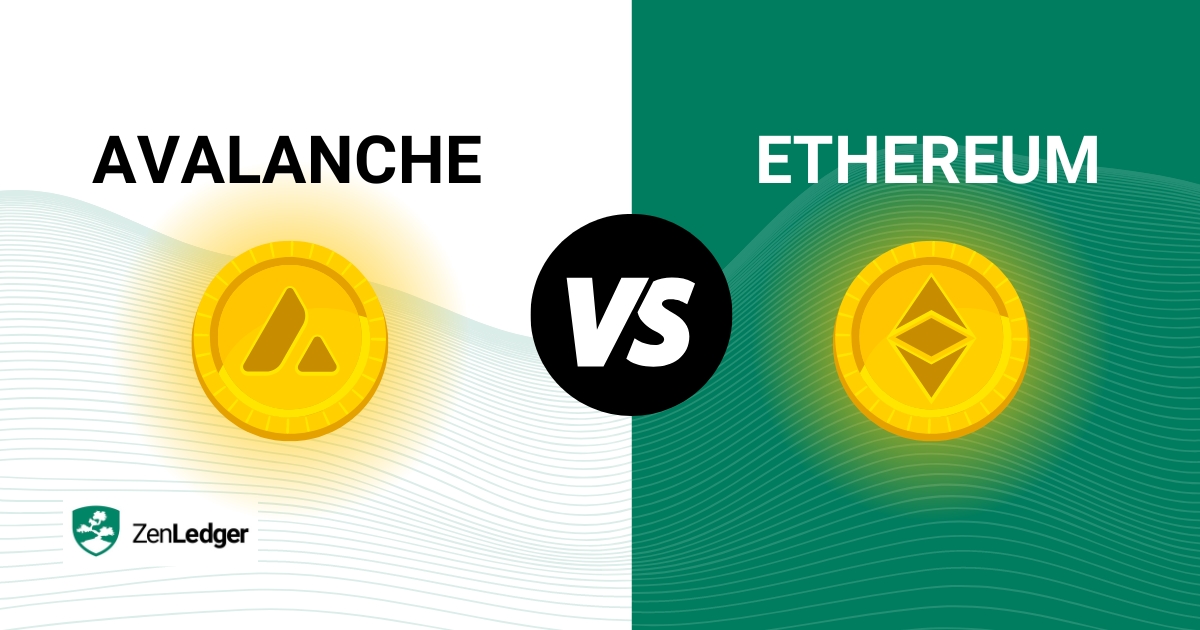 Ethereum, the largest smart contract-focused blockchain, sits at the top of the decentralized finance (DeFi) food chain. However, we cannot look past some of its issues such as slow transactions and steep fees. Therefore, in the past few years, the race to become the fastest and the most featured blockchain has begun.

This has led to the launch of a handful of blockchains that are trying to dethrone Ethereum and one such contender is Avalanche, an open-source platform for new decentralized applications and financial primitives. Avalanche claims to be super fast, cost-effective, and environmentally friendly. Whether Avalanche can hold a candle against Ethereum or not, we will find out in our Avalanche Vs. Ethereum guide. But first, let’s see what Avalanche is.

Avalanche is a smart contract proficient blockchain platform and it focuses on three aspects: speed, transaction cost, and sustainability. All in all, Avalanche aims to become a blockchain network that is highly scalable but doesn’t compromise on security or decentralization.

Avalanche is composed of three blockchain networks. First is the Exchange chain or the X-Chain. The second is the Contract chain or the C-Chain, and the third one is the Platform Chain or the P-Chain. Instead of loading all the tasks on a single network, Avalanche distributes the tasks to different networks to keep the platform agile achieving the holy trinity of decentralization, security, and scalability. Let’s look at Avalanche’s three blockchains: C-chain, which is for DeFi, X-Chain, which is for transfers, and P-Chain, which is used for staking.

Avalanche uses this network to create and transact its assets. The X-chain supports the creation of NFTs, new tokens, stablecoins, and more. Every payment for a transaction is done with AVAX crypto, the native token of Avalanche. Also, one thing to note is that the X-Chain cannot be used in DeFi and cannot be used with MetaMask or other wallets as same as MetaMask.

The Platform Chain or the P-Chain is the final chain that Avalanche offers. This chain is primarily used for staking AVAX and for validators. If you are a validator then you will receive your rewards on this chain in AVAX. Validators can also receive rewards from X- and C-Chain.

Also, with the help of the P-Chain, developers can build layer 1 or layer 2 blockchains. Avalanche refers to them as subnets with P-Chain as the main and common subnet in all.

Ethereum is an open-source, decentralized blockchain system that functions as a platform for several other cryptocurrencies and decentralized smart contracts. What makes Ethereum unique is that it pioneered the concept of smart contracts. They are computer programs that execute all the actions required to fulfill an agreement among several parties on the internet. The best part is that smart contracts do it automatically, eliminating the need for trusted intermediaries between contractors and thus lowering transaction costs.

When Ethereum started, it used a proof-of-work (PoW) consensus mechanism to verify transactions. This system employs validators who compete with each other to solve intricate mathematical problems, and the first one to solve them verifies the transactions. In return, they get ETH as a reward.

The two major drawbacks of this system are its high energy usage and lack of scalability. Validators use massive amounts of energy to verify transactions. Furthermore, the reason behind the high gas fees is that the network cannot handle the number of transactions. So, the user who pays the highest fees gets their transaction processed. Due to these issues, Ethereum switched from the PoW consensus model to the proof-of-stake (PoS) consensus model with its ETH 2.0 update.

With this update, Ethereum will merge the current PoW mainnet with Beacon Chain, a PoS chain. Unified, they will form a new PoS Ethereum consisting of an execution layer and a consensus layer. The consensus layer will coordinate the chain state across the network, while the transactions and block production will be handled by the execution layer.

When it comes to gas prices, Avalanche comes out on top. To create new blockchains and assets, developers and users must pay a small fee. This fee is then sent to a burn address, also known as the eater address, which effectively removes the digital asset from its overall supply. This reduces the total supply of AVAX and increases its demand.

Ethereum, on the other hand, is at an all-time high in congestion, which increases the fees. Moreover, the network is going to increase the fees even further to reduce spam on the network. Even though the majority of traffic on Ethereum is legitimate and not spam, the increase in fees has made the system counter-productive.

Avalanche wins here as well with its multi-chain design. The three chains give it incredible linear scalability, and it can process up to 6,500 transactions in a second and can go up to millions.

Right now, Ethereum can handle only 15 transactions. With ETH 2.0, the network’s performance is set to improve. The upgrade will increase the number of transactions from 15 per second to thousands and even make it more eco-friendly.

Avalanche has its own utility token called AVAX, which is used to seamlessly send value around the world, pay fees, and collateralize new blockchains and assets. In terms of scalability, it again has the upper hand against ETH.

Ethereum’s native token is ETH, which is one of the most famous tokens and is listed on almost all crypto exchanges. It is used to pay validators for verifying transactions, participating in ICOs, and more.

Both Avalanche and Ethereum are used in the DeFi space. A lot of new programs are being launched every day, and a majority of these projects are built on Ethereum, which has a larger application ecosystem. Ethereum users can interact seamlessly in the ERC-20 ecosystem.

Avalanche is also not far behind in terms of DeFi functionality. It has all the features such as staking, lending, farming, and more. Users are paid in AVAX, which they can stake back and increase their returns.

Final Verdict: Which is Better Avalanche or Ethereum?

When it comes to scalability and fees, Avalanche is the clear winner, but in terms of usage in the DeFi space, Ethereum takes the cake. However, with the ETH 2.0 upgrade, Ethereum is going to improve by leaps and bounds.

ZenLedger easily calculates your crypto taxes and also finds opportunities for you to save money and trade smarter. Get started for free now or learn more about our tax professional-prepared plans!

1) What is the difference between Proof-of-Stake and Proof-of-Work?

2) Is Avalanche built on Ethereum?

No, Avalanche is not built on Ethereum. It functions on its three blockchains namely the Exchange Chain (X-Chain), Contract Chain (C-Chain), and Platform Chain (P-Chain).

3) Does Avalanche crypto have a future?

According to crypto experts, the future of Avalanche is very bright. By 2030, it is expected to cross the $150 mark.
Get Started NowSign up for newsletter