SEC vs. Ripple: What’s Happening & What It Means for Crypto 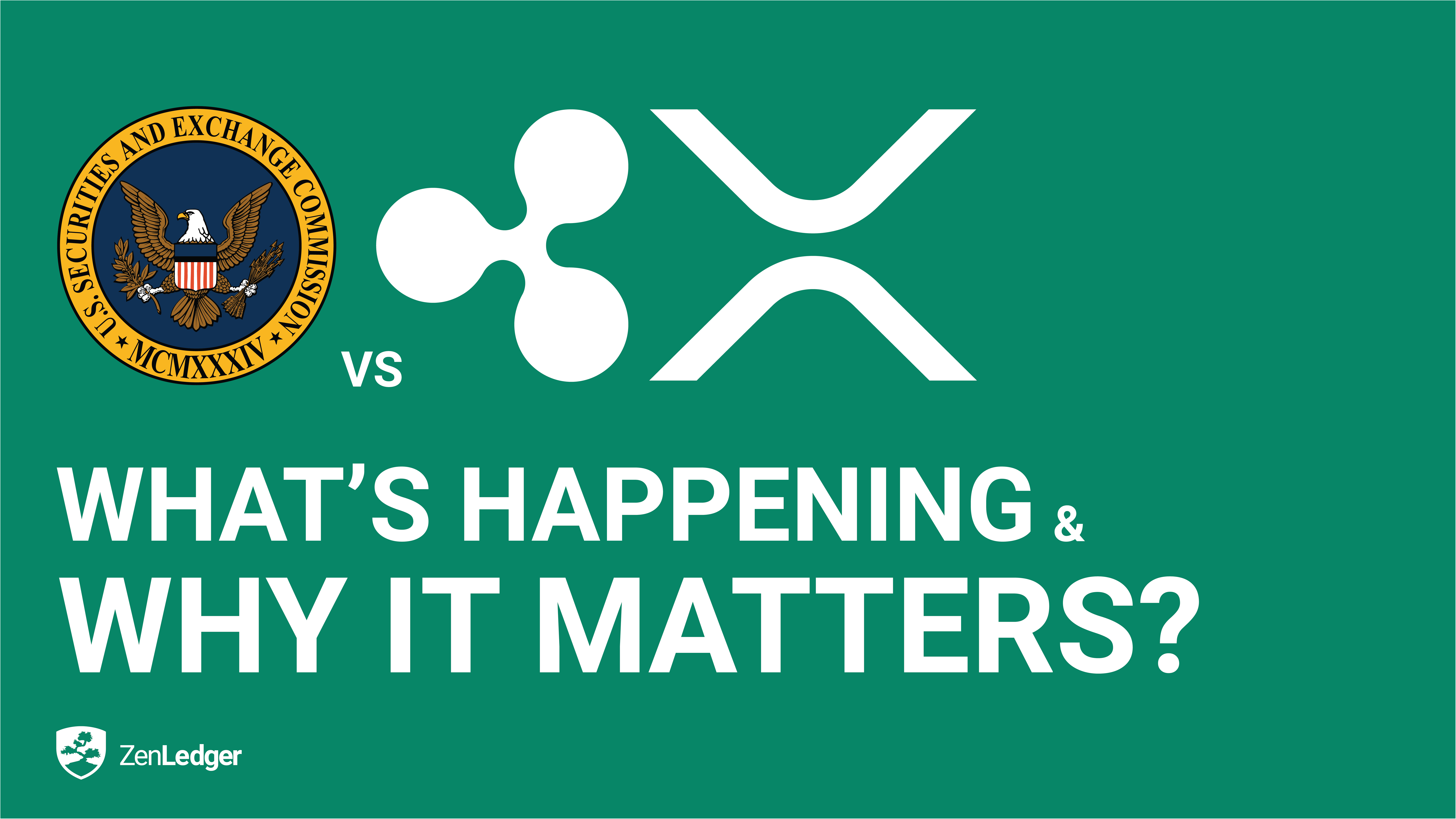 Government guidance on cryptocurrencies and crypto assets has been abysmal. From the lack of guidance on crypto lending tax treatment to crackdowns on unregistered securities offerings,  crypto projects and their users struggle to innovate and invest due to a lack of clarity. The SEC's regulatory action against Ripple Labs is one of the highest profile examples of these dynamics.

Let's take a closer look at Ripple, why the SEC is suing them, and the potential implications for the entire crypto ecosystem.

The SEC's regulatory action against Ripple could have significant consequences across the crypto ecosystem – here's what's happening and what it means for owners and investors.

Ripple is a blockchain-based alternative to the SWIFT interbank messaging system launched in 2012. While SWIFT often takes days to clear funds, Ripple enables banks and other financial institutions to instantly convert currency into XRP tokens, send them via its blockchain protocol, and convert them back into a different currency within minutes.

The Securities and Exchange Commission (SEC) filed an action against Ripple Labs Inc. and two of its executives on December 22, 2020. The complaint alleges that the company and executives raised over $1.3 billion through an unregistered and ongoing asset securities offering. And by failing to register these sales, the company violated federal securities laws.

Beginning in 2013, Ripple started selling XRP tokens to finance its business, according to the agency. The company also distributed billions of XRP tokens in exchange for non-cash consideration, including labor and market-making services. And finally, the two executives made unregistered personal sales of approximately $600 million worth of XRP tokens.

"Issuers seeking the benefits of a public offering, including access to retail investors, broad distribution and a secondary trading market, must comply with the federal securities laws that require registration of offerings unless an exemption from registration applies," said Stephanie Avakian, Director of the SEC's Enforcement Division at the time.

The so-called Howey Test stands at the core of the SEC's complaint. The Howey Test involves determining if an asset's value depends on market forces or the issuer's actions. If investors can use the asset to bet on the future of a company's success, the asset typically fails the Howey Test and may be classified as a security. If not, it may be considered a currency.

Ripple argues that XRP tokens are open source, and it had nothing to do with the creation or maintenance of the tokens any more than other token holders. Instead, the company says it was given a significant amount of XRP tokens by the open-source developers that created it as part of the company's predecessor, OpenCoin – a technically true but perhaps dubious claim.

Moreover, in a previous 2015 settlement, the U.S. Department of Justice and Financial Crimes Enforcement Network (FinCEN) ruled that XRP tokens were convertible virtual currencies. As a part of the settlement, those regulatory bodies permitted XRP token sales and secondary market transactions – seemingly confirming the "currency" designation.

If the SEC knew about the 2015 decision, the company argues that the agency failed to provide fair notice that they may be in violation of federal securities laws. The company even filed a Freedom of Information Act request for documents from the SEC about how it determined that Bitcoin and Ethereum were digital currencies and not securities.

Finally, it's worth noting that regulators in the U.K., Japan, and Switzerland already treat XRP tokens as currencies rather than securities. The tokens are also listed as a form of money by hundreds of banks, companies, and consumer applications that leverage the SWIFT alternative to process cross-border payments. As a result, classifying them as securities could be hard.

The SEC's complaint could have a massive impact on Ripple and beyond. As a result, the entire industry is closely watching the lawsuit.

If the XRP tokens are classified as securities, Ripple must comply with securities laws. Any crypto exchanges buying and selling XRP tokens would require broker-dealer licenses and would need to know the identity of everyone owning XRP tokens (e.g., shareholders). Of course, these would be substantial logistical challenges.

A ruling in favor of the SEC would also have significant consequences beyond Ripple. If XRP tokens are securities, the same designation could apply to hundreds of other existing crypto projects and stem innovation in crypto payments as a broader concept. And as a result, U.S. thought leadership in the crypto industry could wane in payments and other areas.

The SEC's regulatory action against Ripple continues to progress without an end in sight, but that doesn't mean crypto project owners and investors should ignore the potential consequences of a negative ruling. In the meantime, the lawsuit has had a chilling effect on crypto payments innovation, potentially putting the U.S. at a disadvantage globally.

Many crypto advocates hope that Congress will help address the issue by clearly defining the legal status of various crypto projects. While Biden's crypto guidance was a first step, legislators have yet to take up serious efforts to provide these definitions and bring clarity to the market. In particular, there’s no legislation to define what constitutes a crypto security.

If you trade cryptocurrencies and want to avoid IRS-related ambiguities and confusion, ZenLedger can help you keep organized and compliant for tax season. Our platform makes it easy to aggregate transactions across wallets and exchanges, compute your capital gain or loss, and populate the IRS forms that you need to file each year.