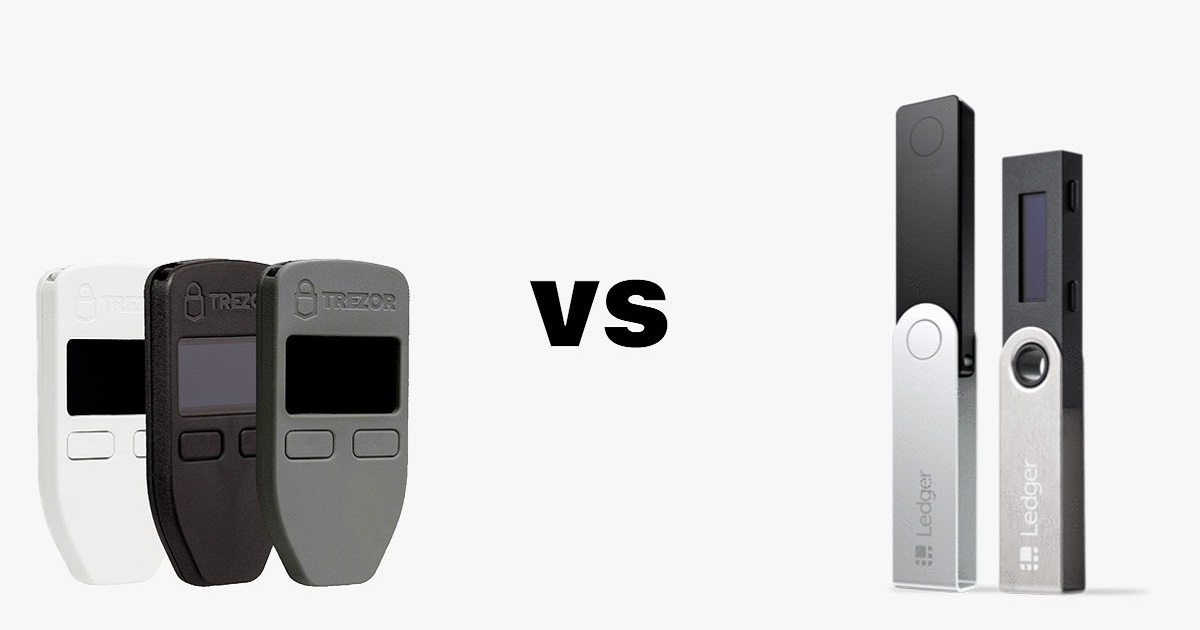 Have you just started buying cryptocurrencies? Has managing your crypto coins been difficult? Are you confused about the difference between software wallets and hardware wallets? If you answered yes, then this guide is for you!

In this guide, we’ll take a deep dive into the two most secure wallets, Trezor vs. Ledger, and help you decide which is a better choice for you.

What Is A Crypto Wallet?

Having said that, it is important to note that there are two types of crypto wallets:

A software wallet is like a mobile or computer application that lets you perform all the functions mentioned above. But, even though the hardware wallet performs the same function, it is a physical device and not an application.

Hardware wallets are not connected to the internet and are thus considered a safer option. Because of this, they are also known as cold storage or cold wallets. There are numerous hardware wallets available in the market and they are all loaded with features.

Let’s study Trezor vs. Ledger, 2022’s most popular hardware wallets, and see how they are different from each other.

Trezor is a hardware wallet that was released in the year 2013. It is a part of SatoshiLabs and is headquartered in Prague, Czech Republic.

Founded in 2014 and headquartered in Paris, Ledger is a fast-growing hardware wallet. It is best known for its advanced security and blockchain apps.

BOLOS, Ledger’s native technology has been integrated into its lines of wallets to ensure security.

The unique feature of Ledger Nano X is its Secure Element, a type of chip generally used in passports and payment systems. As per Ledger, it ingrains essential countermeasures against attacks and makes it “tamper-proof and resistant to hacks.”

Secure Element safeguards the wallet from power usage spying and electromagnetic radiation. This feature also protects the wallet from ‘fault attack,’ a ploy attack that upsets a circuit while it is running. Ledger Nano X’s simple system with a few interfaces reduces the possibility of software attacks as well.

This device offers Bluetooth connectivity, giving it the capability to connect with iOS and Android without cables. Adding Bluetooth connectivity raises some security concerns and Ledger addresses them as well. For one, Bluetooth is used to transport public data only. Critical data such as seed and private keys never leave the device. For two, in case the device is hacked via Bluetooth, the Secure Element asks for the owner's consent for any action. To make the security even sturdier, your Bluetooth connection can be disabled for the users who don’t want to use it.

The Trezor Model T goes old school with its unique security feature but it works like a charm. The device has a microSD card slot, which enables the user to have additional encrypted storage in the future. Right now, the card can be used to encode the PIN and further safeguard the physical device against serious attacks.

The microSD card can be used to unlock the device and you can bind them together and ensure that the wallet can’t be unlocked with the card. You can disable the function intentionally or factory reset the device.

If you are concerned about physical theft of the device, you can take out the SC card and store it in a different location when the wallet is not in use. In this case, if the wallet is stolen, it would be worthless.

Now that we have a brief idea about the pros and cons of both hardware wallets, let’s take a closer look at their features, in terms of their hardware, supported currencies, price, accessibility, and security.

The more complicated a device is, the higher its chances of getting attacked. Trezor and Ledger both have minimal and simple designs and are very easy to set up since they both have strict account protocols. These include verification of account as well as passphrase configuration.

The Trezor wallet comprises an ARM Cortex-M3 processor. The screen resolutions vary depending on the model, such as:

The Ledger wallet, on the other hand, functions on its own operating system called BOLOS (Blockchain Open Ledger Operating System) and as a dedicated chip called Secure Elements. This latter is responsible for carrying out all the programs of the BOLOS ecosystem.

Ledger Nano S and Nano X support the same crypto. The Trezor Model T on the other hand supports more crypto than Trezor One. To name a few:

But there are some coins that are not supported by either of the Trezor devices but are supported by both the Ledger wallets, such as:

Both these hardware wallets have built-in crypto exchanges that help users buy, sell, and trade.

These are the eading among all hardware wallets in terms of security because both wallets provide their users with a private key that is built into the device.

The difference between Trezor and Ledger is that the former uses a single chip base, while the latter is built on a double chip base, called Secure Element (SE). As mentioned earlier, this SE provides an extra layer of security against hardware attacks.

Apart from the price, all the features are mostly the same, such as both have physical buttons and OLED screens. But users who have invested in Cardano (ADA), Monero (XMR), and Ripple (XRP) will choose Ledger Nano S as these coins are not supported by Trezor One.

Coming to the premium devices, the Ledger Nano X is a more inexpensive option at $119 compared to the Trezor Model T which is priced at $190. This price difference is because the Trezor Model T offers a colored touchscreen display, whereas the Nano S is only a little larger in size than the Nano S device.

An open-source platform offers multiple ways to solve a bug or an issue, but also has added security risks. The Trezor wallet uses open-source software and firmware, but Ledger has its own operating system, BOLOS. This simply means that the codes that go into the Trezor device are open to all, but it is not the case for Ledger. Ledger has its device specifications and details completely open to all.

Both the wallets come with a password function. Not just that, we can set multiple passphrases that unlock a unique set of accounts.

The password function is really useful as the wallets can have one main account and more than two hidden accounts, with the same 24-word recovery seed. So, even if we have the recovery seed, we cannot access the corresponding wallets without the password. Moreover, if you are forced to give your password to someone, you can always give the one with fewer assets.

For the Trezor wallet, you have to connect the device to a laptop to enter the password, which makes it vulnerable to attacks.

However, in the Ledger Wallets case, the password is connected to another PIN, which can be entered using the normal keys.

As mentioned earlier, Trezor wallets have a password manager that can be accessed on the Chrome browser on Windows, Linux, and macOS laptops. To use it, you have to install the Chrome extension, Trezor Password Manager (TPM), and sign in with either your Dropbox or Google Drive.

Trezor doesn’t have a mobile app yet, but it’s planning to roll one out later in 2021. As of now, users can leverage their Chrome extension or Trezor Bridge that is compatible with their operating system. They also have a desktop application called Trezor Suite, which provides information on portfolio management and compatible exchanges.

As far as third-party wallet applications are concerned, Trezor offers 15 while Ledger offers 24 of them.

Both Trezor and Ledger are compatible with desktops and mobile devices. Here are the supported operating systems in each:

Trezor and Ledger both support a wide variety of supported cryptocurrencies, but they differ in their display properties, security measures, and price.

If you’re new to the crypto space, the Trezor One will be best suited for you, but if you’re looking for a wider variety of crypto, Ledger Nano S is your best bet. If security is your major concern, you can opt for the Trezor Model T, but if Bluetooth connectivity is your priority, you can go for Ledger Nano X.

To conclude, keep your primary priorities and concerns in mind while choosing the hardware wallet for you.

1. What are Ledger and Trezor?

2. Which is a safer wallet between Ledger and Trezor?

Both Trezor and Ledger are the leading among all hardware wallets in terms of security because both wallets provide their users with a private key that is built into the device.
The difference between Trezor as well as Ledger is that the former uses a single chip base, while the latter is built on a double chip base, called Secure Element (SE). As mentioned earlier, this SE provides an extra layer of security against hardware attacks.

3. Among Trezor and Ledger which is best suited for new crypto users?

If you’re new to the crypto space, the Trezor One will be best suited for you as it offers a seamless user experience along with the essential functionality at a decent price point. The wide range of educational content offered by Trezor is an added bonus for beginners.

4. Which crypto does Trezor support?

Trezor supports about 1649+ cryptocurrencies including Bitcoin (BTC), Ethereum (ETH), Polkadot (DOT), and Stellar (XLM).
The Trezor Model T supports more crypto than Trezor One, such as,