Who Are the Most Influential Women in Web3? 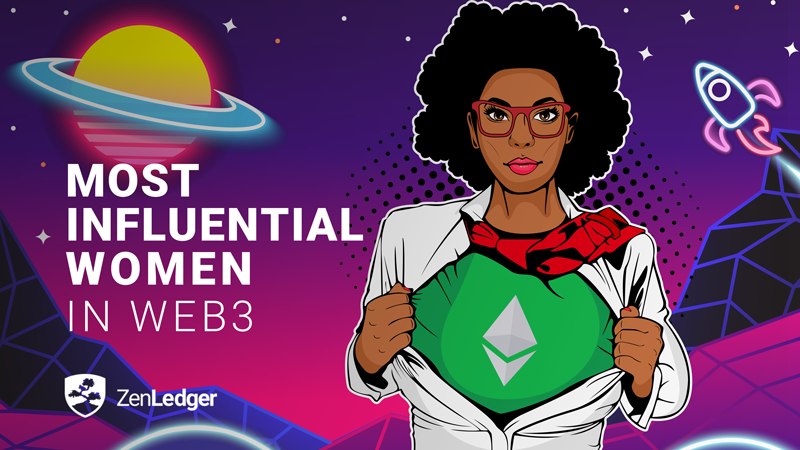 Web3 promises to reshape how we interact with technology and decentralize the web's economy. While less than 5% of all crypto entrepreneurs are women, these dynamics are beginning to change with more women investing in blockchain-powered assets and starting businesses in the nascent industry.

Let's look at some of the most influential women paving the way for the Web3 revolution.

Women make up less than 5% of crypto entrepreneurs, but that's starting to change in recent years.

Krista Kim is a digital NFT artist, founder of the Techism movement, and creator of the Mars House. Her work explores the concept of digital consciousness, with shifting gradients producing meditative experiences.

In response to society's over-reliance on technology, she started the Techism movement in 2014, encouraging artists to promote digital humanism for digital culture. Then, in 2020, she created Mars House as the first metaverse home for sale as an NFT. And in March 2021, it became the highest-grossing sale on SuperRare at 288 ETH.

Kathleen Breitman is the Co-Founder and CEO of Dynamic Ledger Solutions, the initial creator of Tezos. Tezos is a blockchain-based smart contract platform with an on-chain governance mechanism.

Before helping create Tezos, she was a senior strategy associate for R3, a consortium of more than 70 financial firms. She also worked for Accenture, Bridgewater Associates, and the Wall Street Journal. Under her direction, Tezos has reached a market capitalization of about $1.36 billion, making it the 43rd largest blockchain in the world.

Cathy Hackl is the Founder & Chief Metaverse Officer at Journey and the author of Navigating the Metaverse. Journey works with the world's top brands to build immersive Web3 experiences.

She is globally recognized as a metaverse and Web3 strategist and tech futurist. Throughout her career, she has worked on metaverse projects with leading companies like HTC, VIVE, Magic Leap, and Amazon Web Services. She has also been featured in 60 Minutes+, WSJ, TIME, and WIRED's coverage of the metaverse.

Executive Director of the Blockchain Association

Kristin Smith is the Founder and Executive Director of the Blockchain Association, a lobbying organization that aims to improve the public policy environment for blockchain-based businesses.

Founder & CEO of Double A Labs

Amber Allen is the Founder & CEO of Double A Labs, an enterprise metaverse platform where people chat, learn, and play, with over 1,500 global activations and 3+ billion impressions.

She is also a leading expert on metaverse and hybrid events. In addition to leading Double A Labs, she is a community leader and mentor that sits on the advisory boards of UT's Game Development & Design Program, the Fashion Institute of Technology, and the Raiden Science Foundation, where she plays a key role in shaping the industry's future.

Deborah Ojengbede is the CEO of AFEN Blockchain, a platform for digitizing African art, real estate, and education. The platform's single marketplace makes it easy to learn about, buy, and sell NFT assets.

Before starting AFEN Blockchain, she was a banker at Union Bank, one of Nigeria's largest banks. She founded AFEN Group to provide a one-stop marketplace to buy and sell real estate (Metacitti), mint, buy, and sell NFT-based art (NftyTribe), and learn about Web3 and crypto topics via online courses (BloomOne Academy).

Before joining SCB 10X, she was a Pictet Asset Management portfolio manager and a Marathon Asset Management senior vice president. SCB 10X focuses on venture capital investments in the blockchain, DeFi, Web3, metaverse, and other cutting-edge crypto-adjacent technologies. She has a masters in Electrical Engineering and Computer Science from MIT and an MBA from Harvard Business School.

Elizabeth Stark is the Co-Founder and CEO of Lightning Labs, where she's helping to build a programmable financial layer for the internet using scalable blockchain technologies.

Before co-founding Lightning Labs, Stark taught at Stanford and Yale about P2P technology, privacy, and open-source software. She is also an active contributor to the Bitcoin community, an advisor to tech startups, and a fellow at Coin Center. And with nearly 150,000 followers, she is a closely followed crypto expert on Twitter.

Laura Shin is a prolific crypto journalist, host of the Unchained podcasts, and author of The Cryptopians. Unchained interviews interesting thinkers and doers in crypto every Tuesday for an hour-long session.

Before starting Unchained, Shin was a senior editor at Forbes and one of the first mainstream reporters to cover crypto assets full-time. She's best known for her popular blockchain and crypto podcast, Unchained, where she interviews some of the top thought leaders in the space. The podcast has more than 1,100 views on Apple Podcasts alone.

Web3 promises to reshape how we interact with technology over the coming years while democratizing how the internet's economy functions. While women remain underrepresented in the industry, these dynamics are starting to change as more women embrace crypto and build businesses that could become tomorrow's leaders.

If you trade crypto assets, ZenLedger can help you track your assets across wallets, aggregate transactions into a single ledger, and compute how much you owe in taxes each year. The platform also makes it easy to identify ways to save and auto populates the IRS forms you need each year. Sign up today to try it for free!