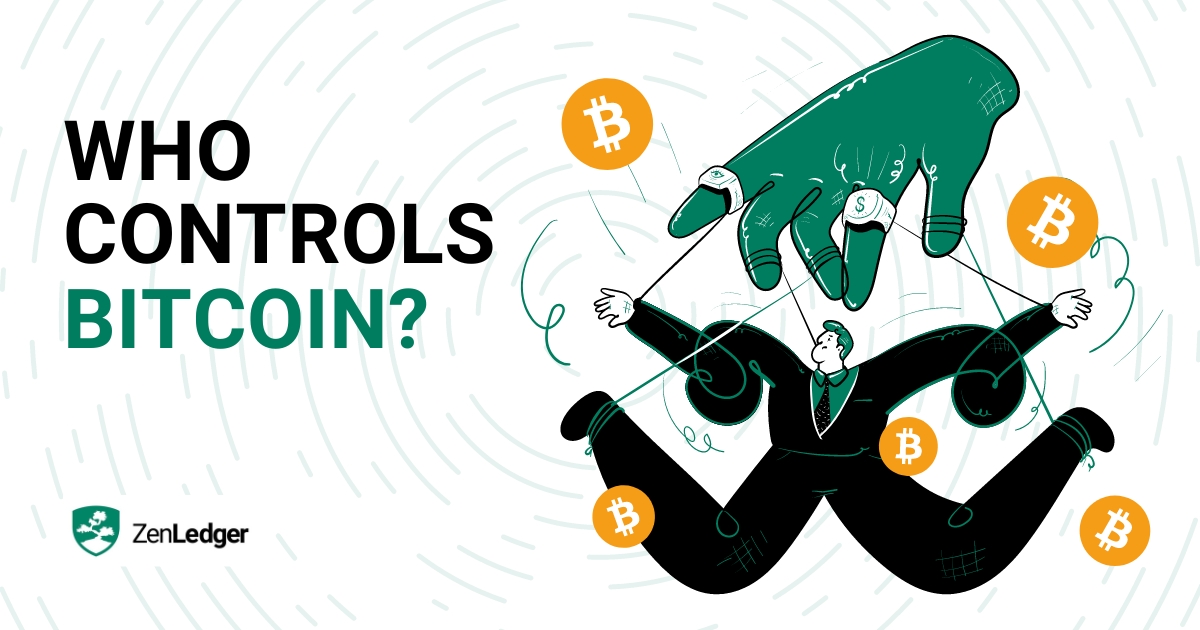 Bitcoin is the first and one of the most popular cryptocurrencies with 46 million users alone observed in America, according to Exploding Topics. But here's the catch: none of them has any control over Bitcoin.

So, who controls Bitcoin? In the blog below, we’re answering the most frequently asked question about Bitcoin.

Who is in charge?

Decentralized networks are defined as networks in which multiple authorities serve as a centralized hub for a subset of players.

The same is true for the Bitcoin network. People who decide to run the Bitcoin software on their computers (or numerous authorities) are in charge of the system rather than a few smaller sites.

Simply put, Bitcoin is a rule-based system with no rulers. Satoshi Nakamoto’s whitepaper “Bitcoin: A Peer-to-Peer Electronic Cash System” was what laid the foundation for the crypto world. He stated in the whitepaper, that it is “a system for electronic transactions without relying on trust.”

He further states, “peer-to-peer network using proof-of-work to record a public history of transactions” he implies that no single entity will be in control of Bitcoin as it is the nature of Bitcoin to be “enforced with this consensus mechanism.”

So who controls Bitcoin? The answer is not a single person, entity, or authority.

Bitcoin is controlled by its users, miners, nodes, exchanges, and developers worldwide. The bitcoin software can be created and improved by anyone. Ultimately, this strong network needs everyone to follow the very same system of regulations, and that is how consensus in Bitcoin is attained — by majority vote.

Bitcoin is the first ever cryptocurrency, and for this reason, it always dominates the crypto market. This circumstance is usually referred to as “Bitcoin Dominance”. It is Bitcoin’s share in the market capitalization of all crypto tokens. It also tells you if altcoins are performing better, worse, or similarly to Bitcoin.

Bitcoin Dominance is oftentimes used as an important metric by seasoned traders to give them a sense of the crypto market’s performance. You can calculate it by dividing Bitcoin’s market capitalization by all cryptocurrencies’ market capitalization. The Majority of coins follow Bitcoin’s movement, which changes according to key developments from around the world.

Bitcoin whales can affect the price of Bitcoin and cryptocurrency markets globally. How? When a whale switches its BTC to sell, the price drops dramatically. But this is countered by the market and the community, which work to raise the price back to the equilibrium point where everyone's interests are aligned.

Even Satoshi Nakamoto's actions had a straightforward objective: to steer toward a decentralized future in which centralized powers are balanced by the development of their counterparts.

So, rather than one or two people, Bitcoin is "controlled" by a community of people with similar interests – intriguing enough?

ZenLedger easily calculates your crypto taxes and also finds opportunities for you to save money and trade smarter. Get started for free now or learn more about our tax professional-prepared plans!

1) Who is the actual owner of Bitcoin?

Although Satoshi Nakamoto, the mysterious person who created Bitcoin, is its inventor, no one actually owns the Bitcoin project. Bitcoin is a piece of software that is managed by a decentralized network, which implies that no single entity is in charge of the software's set of guidelines.

2) Is Bitcoin controlled by the government?

Cryptocurrencies are neither produced nor regulated by any centralized government or bank, in contrast to fiat currencies. Some may be puzzled by the absence of a tangible sign to count and grasp.

3) Can Bitcoin exist without the internet?

Crypto transactions will seize and you cannot send or receive crypto if the Internet goes down. They won't be compatible with a digital wallet. You won't be able to exchange them for any other money or swap them for other cryptocurrencies.
Get Started NowSign up for newsletter