Bitcoin vs Ethereum: Difference between Bitcoin and Ethereum 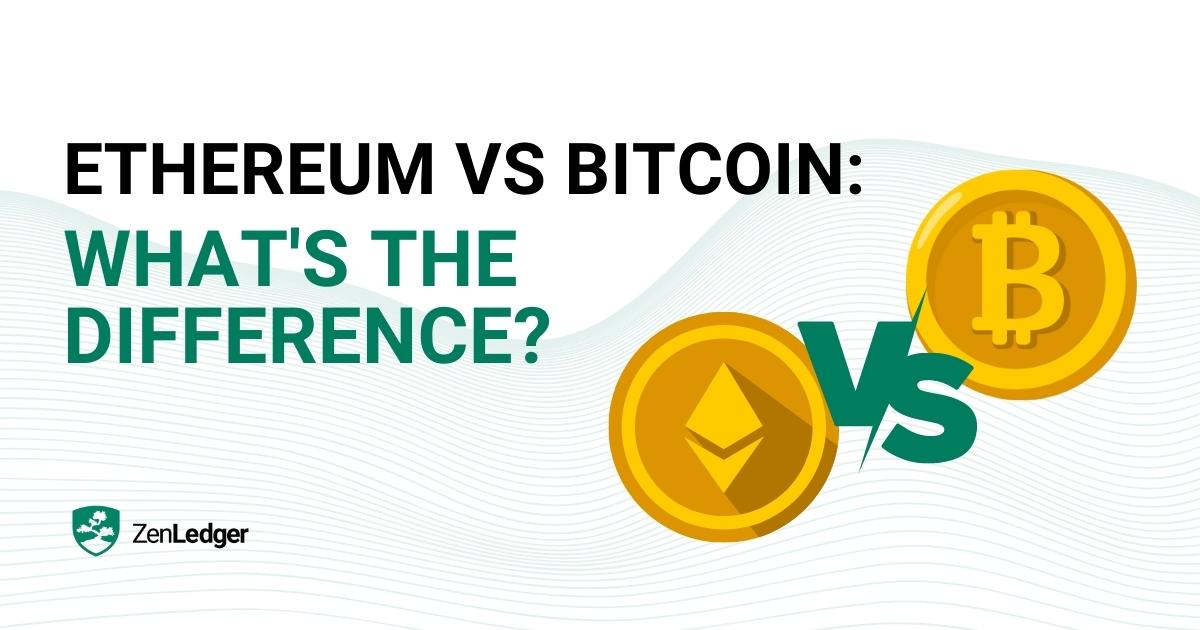 Bitcoin and Ethereum — two of the largest cryptocurrencies by market cap have made significant contributions to the crypto economy. The Ethereum vs Bitcoin rivalry has been going on for a long time now.

Due to its limited supply, which is similar to precious metals, as well as its ease of storage and division, Bitcoin is referred to as “digital gold.” Ethereum, on the other hand, is regarded as the world’s decentralized computer since the network is used to run decentralized apps (dApps), or programs that are not controlled by a central authority.

These are the top two cryptocurrencies according to many measures. But there are many underlying differences between these two technologies — from their consensus mechanism to transactions per second, supply to usage. Let us delve into the world of the two popular cryptos and decode the differences between Bitcoin vs Ethereum.

Launched in 2009 on the foundation set by Satoshi Nakamoto, Bitcoin has gained popularity over the years and is also considered the ‘digital dollar’. It is the first ever decentralized currency (currency that isn’t issued or regulated by the government) — just balances linked to a public ledger that has been cryptographically protected.

This means that the entire Bitcoin network depends on a decentralized network of users, and works on the proof-of-work (PoW) algorithm. The rules provided by the network govern a number of factors, including the supply limit of 21 million BTC.

Ethereum, the second-largest cryptocurrency after Bitcoin, was based on a whitepaper issued by Vitalik Buterin in 2013. The document consisted of the usage of smart contracts which is fundamental to decentralized applications (dApps). These dApps enable Ether and other crypto assets to be used in a variety of ways, such as collateral for loans or to be lent to borrowers to earn interest.

Ethereum has taken blockchain technology to the next level by conducting transactions and connecting with applications that run on the Ethereum network.

On the 15th of September 2022, Ethereum successfully transitioned its consensus mechanism from proof-of-work (PoW) to proof-of-stake (PoS) [More on this, later in the blog]. It will feature an execution layer to handle interactions with smart contracts and a consensus layer to synchronize chain information throughout the network. Additionally, PoS will reduce Ethereum’s energy consumption by approximately 99.95%.

Now that we know the basics of both Bitcoin and Ethereum, let us understand how the two cryptocurrencies are different from each other.

Ethereum vs Bitcoin: The Contrast Between the Two

Public blockchains and cryptography are the foundations of both the Bitcoin and Ethereum networks. But they differ greatly from one another in terms of consensus algorithms, uses, and other technical parameters.

So let us look at the differences between Bitcoin vs Ethereum.

Both Bitcoin and Ethereum use “blockchain” technology, but Ethereum is much more reliable. Ethereum is version 2.0 of Bitcoin, enabling the development of decentralized apps to be created on top of it.

Proof of work (PoW), a consensus technique used by Bitcoin, enables the network nodes to concur on the status of all information collected and guards against certain network assaults. The fact that proof of work requires a lot of computer power and is hence very energy-intensive is one of its main drawbacks.

Proof of stake (PoS), on the other hand, swaps mining with staking, which uses less energy, and validators instead of miners who stake their bitcoin holdings to enable the creation of new blocks.

Since it was developed as a substitute for fiat money, bitcoin aims to serve as both a means of trade and a store of wealth. With Ethereum, users will have more ownership over their information and the ability to create and operate apps on the blockchain.

While both Bitcoin and Ethereum are cryptocurrencies, Ether’s main goal is to make it easier and more profitable for smart contracts, decentralized applications, and any other blockchain-based solutions to operate.

ERC-20 tokens that are based on Bitcoin are also present on the Ethereum network. A tokenized version of Bitcoin was developed and deployed on Ethereum to benefit from DApps.

Bitcoin vs Ethereum: In Upcoming Times

A major obstacle preventing the mainstream use of cryptocurrencies is scalability. A blockchain network can manage up to billions of transactions per second (TPS) if scaled appropriately. In this situation, the Lightning Network reduces energy costs related to Bitcoin’s blockchain by dealing with and resolving off-chain. This enables new use cases, such as fast micropayments.

Similarly, owing to the traffic congestion of the Ethereum blockchain, substantial transaction costs are incurred. Layer 2 networks connecting to Ethereum’s Layer 1 chain is an easy fix for the network congestion issue. These L2 scalability options function as highways that link to Ethereum’s highway, unloading traffic to make it efficient and reasonably priced.

One of the popular L2 sidechains of Ethereum is Polygon
(MATIC) which can carry out about 7,000 TPS.

The difference between Bitcoin and Ethereum is summarized in the table given below:

In many respects, ether and bitcoin are similar. However, your purpose of using the platforms will better define which network is better suited for you: Ethereum vs Bitcoin.

Ethereum will be your best option for developing dApps and smart contracts, but Bitcoin serves better as a peer-to-peer payment mechanism.

Even after fluctuations in the first half of 2022, it is believed by crypto experts that Ethereum will surpass $4,000 again in 2022.

2) What is a Lightning Network?

In a two-party transaction technique known as a Lightning Network channel, parties can send or receive payments from one another. By handling transactions outside of the blockchain mainnet (layer one), layer two increases the scalability of blockchain technology while still utilizing the mainnet’s strong decentralized security paradigm.

Ethereum’s blockchain internet Polygon (MATIC) is one of the booming cryptocurrencies in 2022.
Get Started NowSign up for newsletter