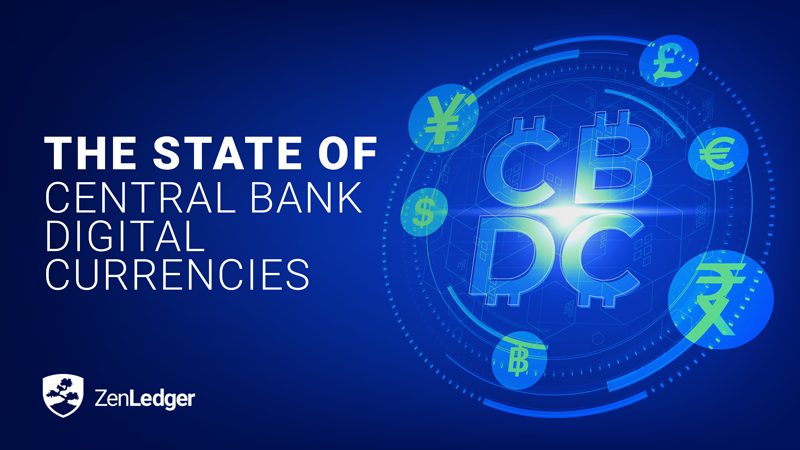 The crypto ecosystem may suffer from scandals, hacks, and fraud, but there's no doubt that underlying technology is transformative. While many crypto projects avoid centralization, governments are betting that central bank digital currencies, or CBDCs, could better unlock the benefits of crypto for consumers and institutions.

This article will look at how CBDCs work and various pilot projects that aim to make them a reality.

Central banks are exploring the idea of digital currencies to reap the benefits of blockchain technology. Here are the projects furthest along and what to expect in the future.

Most people are familiar with Bitcoin and Ethereum. At their core, these cryptocurrencies run on blockchain technology. The distributed databases are spread across thousands of nodes, while miners and stakers help record transactions. As a result, no single entity controls the cryptocurrency networks; they're fully decentralized.

The most immediate use case for CBDCs is making payments and transferring funds between institutions. In particular, they could help efficiently settle slow and costly cross-border payments. For instance, Saudi Arabia and the UAE launched Project Aber as a jointly issued digital currency to settle transactions between the countries.

Over time, they could also provide a way for businesses and individuals to make payments for goods and services without using fiat currency or credit. For example, the Bank of Israel is exploring a smart contract-enabled CBDC that automatically applies sales tax to transactions at the point of sale to improve convenience and compliance.

The Caribbean is the CBDC Epicenter

The Caribbean region's small economies and dependence on foreign trade and remittances create a challenging banking environment. In addition, several countries in the region have come under scrutiny for money laundering, raising the cost of doing business with international banks or cutting off access entirely.

Central Bank Digital Currencies have become an attractive solution to these problems, making it a global pioneer in developing digital currencies. Three CBDCs have launched in the region, including the Bahamas' Sand Dollar, Jamaica's Jam-Dex, and the Eastern Caribbean Central Bank DCash in seven member states.

These CBDCs aim to help Caribbean countries meet anti-money laundering standards while expanding access to the banking system. Without legacy banking systems or extensive regulations, these countries could move much faster when developing and implementing CBDCs, bringing them to market to solve critical challenges.

But, of course, launching CBDCs doesn't guarantee their traction, and there have been growing pains along the way. For example, the Sand Dollar (Digital Bahamian Dollar) had only $300,000 worth of digital cash in circulation, 30,000 digital wallets, and 845 participating merchants in July 2022. DCash (Eastern Caribbean Central Bank Digital Currency) crashed in January and was down for almost two months.

Pilot Projects Hint At What's Next for CBDCs

China became the first major world economy to pilot a Central Bank Digital Currency in April 2020. While the People's Bank of China hoped to launch its digital yuan in time for the 2022 Winter Olympics, the e-CNY remains a pilot project. That said, it's an extensive pilot project with transaction volume crossing $14 billion by the third quarter of 2022.

In addition to China and the U.S., France, Canada, Nigeria, Saudi Arabia, and the UAE are a handful of other countries with CBDC pilot projects. Unfortunately, many of these pilot programs were purely exploratory, suggesting that the launch of a CBDC wasn't the end goal. And others have lost steam amid the crypto winter.

Individuals, businesses, or investors interested in following CBDC developments worldwide can use the CBDCTracker to see the status of CBDC projects and access the latest news. The tool even provides a timeline to help show when projects experienced updates and enable anyone to create customized watchlists.

CBDC Alternatives & Other Trends to Watch

Central Bank Digital Currencies aren't the only solutions for cross-border payments or other currency-like challenges.

Ripple already enables businesses to settle cross-border payments in seconds using its proven technology and global network. Using RippleNet, banks and payment processors can connect in real-time to a worldwide network enabling them to send and receive payments instantaneously with complete transparency and finality.

On the other hand, Tether and other stablecoins are already providing a digital version of fiat currency for use as collateral. While there's some concern about the reserves backing Tether, the project demonstrates that private organizations can fill a role that fiat currencies have conventionally filled as a source of agreed-upon collateral backing transactions.

And finally, many crypto enthusiasts argue that Bitcoin, Ethereum, and other cryptocurrencies could replace the need for CBDCs by acting as an international currency. While high fees, slow transactions, and other issues have been hurdles in the past, ongoing breakthroughs address these problems and could make them more viable moving forward.

Central Bank Digital Currencies have the potential to reshape the financial system by putting fiat currencies on the blockchain. While these digital currencies remain in the early stages, China is already processing billions of dollars worth of transactions, and the U.S. Federal Reserve is actively working with banks to facilitate institutional transfers.

If you trade crypto assets, ZenLedger can help you aggregate transactions, compute your capital gains, and auto-fill the IRS forms you need every year. In addition, you can identify tax loss harvesting opportunities throughout the year to lower your tax bill and track all of your assets and their performance in a single account.

Get started for free today!